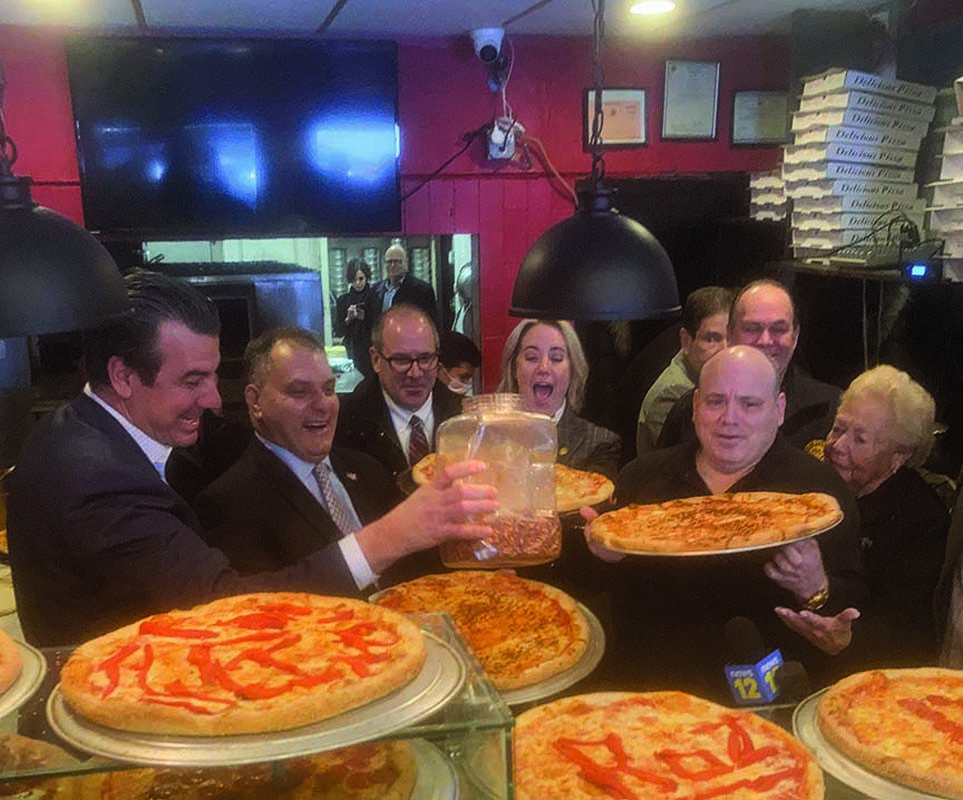 It was free pizza for everyone at DiMaggio’s Pizzeria in Hicksville this past Tuesday, as the local establishment celebrated what would’ve been the 100th birthday of Rosalind Nyman Joel. Joel was the mother of famous Long Island musician Billy Joel, who grew up in the town.

Community and civic leaders,  including Oyster Bay Town Supervisor Joe Saladino and Nassau County Legislator Rose Walker, were on hand to celebrate the occasion. In honor of the “Piano Man’s” mother’s birthday, DiMaggio’s gave out free pizza to everyone and dedicated a pizza pie in her name.

“Rosalind, or Roz as she was known,  passed away in 2014 at the age of ninety-two,” said Sal Stile, the owner of DiMaggio’s. “She raised her son Billy and daughter Judy in Hicksville and put everything she had into helping Billy launch his music career. She paid for his piano lessons and helped lead him on the road to success. Rosalind will always be remembered as an integral part of this Community.”

Stiles said that Rosalind always got her pizza at DiMaggio’s and that one of Billy Joel’s early bands played musical gigs at the establishment.

Supervisor Saladino said that he was proud to celebrate the life of Rosalind Nyman Joel and the music of her son  Billy, whose music is “the soundtrack to our lives.”

“Rosalind Joel, who we like to call the “Piano Mom,” would have a-hundred year old today,” said Saladino. “Neighbors and friends might remember that not only is she the mother of one of the world’s most famous musicians, and famous residents of the Town of Oyster Bay, but she was an active member in the community. She bought pizza for her kids here and loved sharing the thin crust pizza with her on the way to piano lessons.”

“Establishments like DiMaggio’s Pizzeria  are woven into the fabric of our community. Sal (Stiles) and even other owners of pizzerias in the area are well respected in the community.”

County Legislator Rose Walker said she has been a member of the Hicksville community for seventy-plus years and hanging out at the Village Green, where DiMaggio’s is located, was the thing to do.

“Families like the Joels and my family spent our summers at the pool and had our pizza here at DiMaggio’s and sandwiches at the local deli,” said Walker. “This is home and where we grew up and had some of the greatest days of our lives.”